The line-up for the third annual Big Pineapple Music Festival has been announced, and it’s pretty epic. The festival is proudly all-Australian and will this year be headlined by John Butler Trio, The Jezabels and Violent Soho. The new Sunshine Coast site boasts three bigger and better stages, grander views and plenty of camping space, not to mention the festival’s namesake if you want to stand and thoughtfully admire a giant fruit between bands. The organisers claim to have fixed all issues from previous years and guarantee an awesome time at this year’s event.

It’s all going down on Saturday 30th May and features:

Early bird and members’ pre-sale tickets are now available. General public tickets go on sale Tuesday 10th Feb at 9am. Hit up the official website for deets and tix. 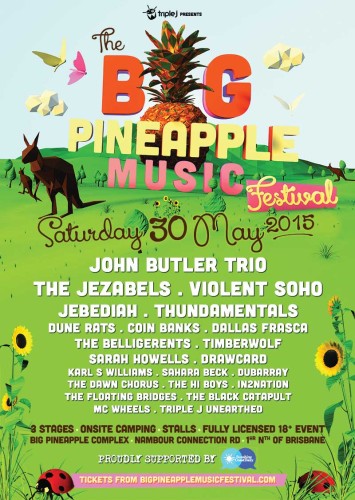