For fifteen years, The Bamboos have been one of the leading forces in Australia’s funk and soul scene. Led since their formation by guitarist/songwriter/producer Lance Ferguson, the eight-piece ensemble are bringing their renowned live show to Taronga Zoo, as part of its Twilight at Taronga concert series. The event showcases some of Australia’s best live music amid the sights and sounds of one the world’s most famous and beautiful wildlife sanctuaries. All profits from the event go to the Taronga Conservation Society Australia.  We had the pleasure of speaking to Lance ahead of The Bamboos’ appearance on February 21.

Twilight at Taronga is a really interesting idea for a showcase, isn’t it?

The Bamboos have played the Melbourne Zoo; they do a thing called the Melbourne Zoo Twilights, which I imagine is pretty similar to what’s in store at Taronga. We had a blast. It’s just a really nice, relaxed set up [but] if you want to come up and dance that’s cool.

It’s a family kind of thing, as well. We don’t always do a lot of all ages shows, so it’s great if kids can come and check out the band.

I think I’m probably younger than the vast majority of Bamboos fans. Are you surprised by the breadth of interest in the band? You must get all sorts of different people who are fans of your work.

Yeah, it’s interesting. People get in touch with us who are definitely all ages, and I think that’s cool. We’ve never gone out there and sort of gone, we want to appeal to an 18-25 year old demographic. We’ve never had that in our heads at all. It’s just been let’s make the music we make, the music we like, and just play it.

We’ve played so many different kinds of places over the last 15 years: really youth-orientated festivals to things that are more mellow, older age things, things for small children… Without trying to sound too profound or anything, people are people, and I really enjoy the fact that a whole spectrum of people can get into what we do.

The live show is such an integral part of who The Bamboos are, but you must have played the same songs countless times. How do you maintain the energy and enthusiasm that makes your live shows so remarkable?

I was talking about this with Kylie Auldist, our vocalist, and John Castles, who’s done all our studio work and live sound work and is really a member of the band, the other day. We were saying there seems to be some sort of minor – and at times major – cathartic thing that draws us into the band at every show. There’s some sort of intensity that happens for us as a group of people on stage – musically, and personally as well.

For some reason we can’t just get up there, plug in and play; there seems to be this real sense of occasion with us that creates this intense feeling. And we always get nervous before gigs. I’m not sure where [the intense feeling] comes from, but I’m glad it is there. At times it can be problematic because sometimes you do just want to be completely relaxed and do a show. Even if we’re doing a gig and there’s no one there – we’ve done European tours where we’ve played to little rooms where there’s been no one there – we still seem to be able to have this thing going. I think somehow that carries across or connects with people.

It also means that if we’re playing a song, as you say, [that] we’ve played hundreds of times for years and years, it doesn’t matter. In a way the song almost becomes transparent to us; it’s more about the energy level we can invest into it at the time. If anything it hasn’t actually diminished, either; it’s gotten more intense. Maybe it’s because we’re too old now and we require too much energy [to perform].

Do you find that there’s that same kind of cathartic energy in the songwriting and recording process?

It is always some sort of emotional rollercoaster. They’re such different worlds. Personally I find the studio can be the opposite of what I was describing; you can try and sit back and go, where is this going wrong? What does this song need? I do enjoy having that more rational-minded [view] of the music-making process, whereas the live [show] is more chaotic and driven by raw energy.

Fever in the Road somehow manages to be both leaner than your previous works and a more full-bodied album. How was that achieved?

I know what you mean, and I’m glad you’ve picked up on that. I came up with that album because the previous record (Medicine Man) was so guest-heavy. I was like, let’s just boil this down to us and really strip things back. I want to be able to represent what we are as a band and then come out and play it. There are moments where it feels like it is stripped back and minimal, but then there’s this wall of sound thing going as well, which is John Castles’ influence.

You touched on the number of guests who appeared on Medicine Man. One of those, of course, was Tim Rogers (of You Am I). I understand you’re working on a whole album with him; how is it progressing?

Yeah, we did that one song with him, I Got Burned, which wasn’t off-the-cuff or whatever, but it just for some reason happened really fast; it was written really fast and recorded really fast. And I liked it at the time and thought, this is a cool track, and I loved what Tim did on it. Then it ended up becoming our most visible song, so it’s weird how things like that play out.

We met through Megan Washington, who’s a good friend of mine and also appears on that album. We really hit it off doing [I Got Burned] and we thought, well, what would happen if we did spend more time and wrote some songs together? And we ended up writing a full-length album which is going to come out in the next few months as a ‘Tim Rogers and The Bamboos’ direct collaborative effort. This album has taken a slightly different turn, musically, so I can’t wait for people to hear it.

I Got Burned is a brilliant song, but is it fair to say it’s not an accurate represent of The Bamboos as a band?

I guess not, in that Tim Rogers is not part of the band. Kylie Auldist has been singing I Got Burned, for instance, because we need to play that song. People want to hear it and Kylie has made it her own out of sheer necessity.

In terms of what you’re saying, Tim is an imposing personality. You can’t dilute it, you know? But that’s what I love about working with people with such strong musical identities is this collision between what we do and what they do and what’s going to come from that.

This year is the fifteenth anniversary of The Bamboos. How have you managed to consistently adapt, improve and reinvent your sound on each album over fifteen years?

There are bands who operate in the soul and funk world who are like ‘time machine’ bands, who absolutely nail that scene and do it in such a high-quality fashion. But for me, I just had this kind of bug inside me which was like, I want to start there, but I don’t think I’d be comfortable making that for the rest of my life.

I want to try and somehow progress and develop the sound of this band, and in truly doing that I think we’ve lost as many fans as we’ve gained, because some people really do want you to stay within the stylistic parameters of what they see as soul music or funk music. Long ago I sort of gave up on aligning us with any one genre. From the outside you can go, well, it is this and it is this and it fits into this box, but I think it’s important for me, as someone at the centre of it, to not be thinking about those things at all.

Maybe two albums into our career I decided to throw all those benchmarks of what should and shouldn’t happen in this style of music out the window, and go down some tangents and try some different stuff. As I said, that probably alienated us from a bunch of real purist-type people, but I think, in the end, any artist wants to be doing some music that is modern and current and also progressive. It is challenging working within genres that have such a historic legacy of [authenticity], but I think it’s also great to try and push the envelope as well.

The Bamboos will be playing Twilight at Taronga on Saturday the 21st February. Tickets are available here. 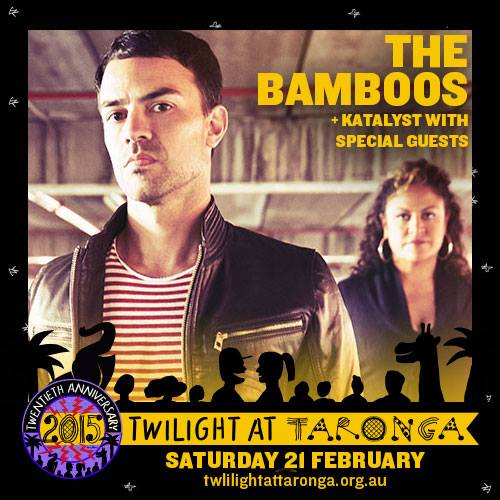