Hello! Here’s a neat little round-up of some of this week’s cool music news.

1. Groovin The Moo announces its most epic lineup yet

Proving itself to me SO much more than the small, regional festival it once was, Groovin The Moo has announced an EPIC lineup. International acts include A$AP Ferg, RL Grime, Peaches, Peace and Charli XCX, while the Australian bill is the absolute best of the best, including The Preatures, Flight Facilities, Saskwatch, Hermitude, Hilltop Hoods, DMA’s and The Delta Riggs. Holy. Moly. 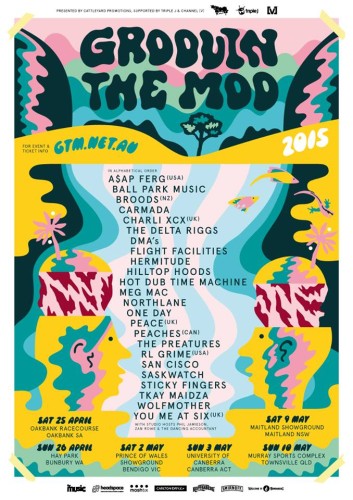 It took me a long, long time to get into Melbourne stoner-songstress Courtney Barnett, but I can happily say I am now ON the bandwagon. Just this morning, she released the first single off her forthcoming debut album, which will be released via Remote Control on march 20. You can catch her on tour this week with Laneway Festival.

You may recall the mindblowing news that my two current favourite acts, Jack White and Run The Jewels were playing together in Madison Square Garden. Jack has now one-upped himself by announcing a co-headline concert in Chile with Led Zeppelin frontman Robert Plant. Back in September, Plant announced that he was interested in recording with White, and this is hopefully the first step toward a fruitful musical relationship!

I have a big problem with Daniel Johns and  Ihave for a while now. Mostly because of how much I loved Silverchair. As the first band I EVER really got into, they influenced me more than any other act ever. And then Daniel Johns got progressively shittier, topped off by his godawful fucking slow, grand piano rendition of Smells Like Teen Spirit at Beat The Drum. Anyway he’s released a new song, produced by Joel Little who co-wrote Lorde‘s blockbuster debut Heroine. It’s okay. It would be good if it weren’t by Daniel Johns, but it is, so, I physically can’t get myself to like it.

5. Alt-J announce that Asgeir will be opening for them on their national tour in May

This is a pretty lovely pairing. Asgeir and alt-J, both Hottest 100 winners and now-regulars to the Aussie touring circuit, have confirmed that the Icelandic songwriter will be playing his ethereal tunes to get the crowd in the mood for the Grammy nominees’ headliner set. Head here for more details including ticket sales!

6. Kanye West, Rihanna and Paul McCartney teamed up for one of the best songs all year

For anyone else I’d call this a strange collaboration, but there’s no such thing as strange when it comes to Kanye West. In one of the loveliest R&B-folk songs I’ve heard in a very long time, and probably my favourite Rihanna melody ever, the two R&B A-listers have teamed up with the great Sir Paul McCartney for FourFiveSeconds. They’ve now announced they’ll be performing this live at the Grammys, undoubtedly an absolute show highlight.

At only 25 years old, the fact that Shlohmo is about to release his second full-length album is a pretty amazing feat, considering the amount of producers who prefer releasing sparse singles, remixes and EPs to longer bodies of work. His new single Buried has absolutely blown me away with its powerfully dark, brooding, post-apocalyptic atmosphere, and I can only hope the album will follow on from this. Dark Red will be dropping on April 2 through True Panther and Remote Control. Lets hope a new tour is in the works too!