Last time I was inside the National Art School was for a school excursion in 2011. Pretending to be interested in Fine Art Restoration was surprisingly exhausting, and I had zoned out for a few minutes. A thought crossed my mind that this would be a magical place for a house party. Astral People have taken that idea, added a few essential ingredients and created a delicious product. This was the fourth of six Summer Dance parties, all held in the heart of the city.

As I stepped inside the two huge steel doors decorated with vines, it struck me that you really couldn’t get a better venue than the National Art School. Originally the site was Darlinghurst Gaol and spent 73 years in operation. 67 people were executed inside the Gaol, which gives it those spooky vibes. The main stage was set up just behind the Cell Block Theatre, creating a courtyard dancefloor and plenty of room to chill out on the grass up the back. 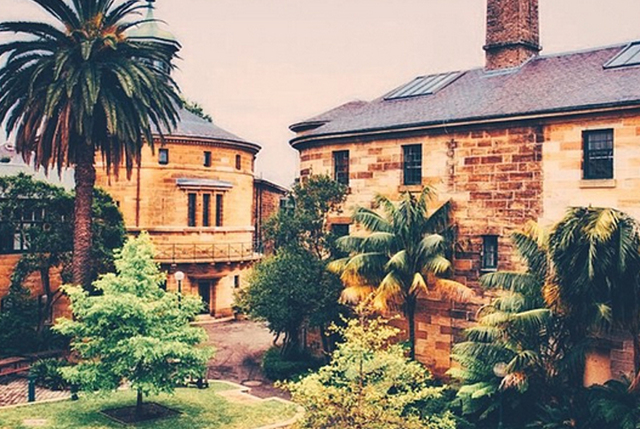 Magda Bytnerowicz warmed things up from 2pm, with a selection of old school house, tech-house and even a little bit of disco. Following up from Bytnerowicz (that’s a very boss last name by the way) was Mike Who. A regular on FBI’s stolen records show, the Sydney Frontman shook things up and gave us various bangers. Signed with Astral People, Mike Who is one to watch and showcased why he tore up Triple J’s Mix Up Exclusives last year.

Tornado Wallace stepped up for the 4.30pm – 6pm time-slot. Tornado Wallace is the best DJ name I’ve heard in a long time and the Melbourne based producer did not disappoint. Picked up by London’s Warm Agency, Lewie Day (Wallace’s real name) provided some seriously deep tunes. Coming off the back of his 3 track EP ‘ESP Intitute’ Day, Tornado Wallace is set for a huge 2015.

Darker shades of sunlight descended and it was time for Mister Saturday Night to take the stage. Mister Saturday Night is the label and party created by Justin Carter and Eamon Harkin, a pair notorious for throwing the best outdoor parties in New York. The duo were ideal headliners, with their enormous stage presence that drew everyone sitting to their feet at some point throughout the three hour set.

Carter and Harkin emphasise that any of their performances are about  “creating an experience that isn’t remotely cooperate, a party that feels like your surrounding yourself with your friends, your people and you can just relax and have a good time.” Mister Saturday Night nailed this concept which is really what Summer Dance is all about and gave us a taste as how they wave their magic wands back home.

Astral People have created the perfect recipe in Summer Dance and be sure to hit up the last remaining two or regret it until next summer.

For tickets to the next two Summer Dance’s head here