Ásgeir Trausti Einarsson is one of those artists so enormously talented that his appeal is able to transcend the barrier between languages. So potent is his talent, that an Anglophone can sit there in complete and utter rapture and enjoy his music. The melodic folk singer’s success in his native Iceland is even more impressive, where it’s estimated that ten percent of the population owns his debut album Dýrð í dauðaþögn.

And what better place to showcase such great talent other than the Sydney Opera House? The architectural wonder was the perfect backdrop to the Scandinavian’s mysterious and enthralling music. Performing there is a huge feat for any artist, and even bigger one for the 22-year-old who played a repertoire of songs from his album In the Silence, both in Icelandic and English.

It was a balmy Wednesday night as hundreds of Ásgeir fans packed themselves into the iconic venue in eager anticipation of the night’s sold-out performance. With no opener, the Icelander took to the stage soon after 9pm, accompanied by a veritable orchestra of violins, trumpets, drums and trombones, and began with Head in the Snow and In The Silence. Higher followed, Lupin Intrigue, also known as Frost, was a standout performance, with Ásgeir’s voice soaring to impossible heights as he hit every note perfectly, leaving the entire audience utterly transfixed. 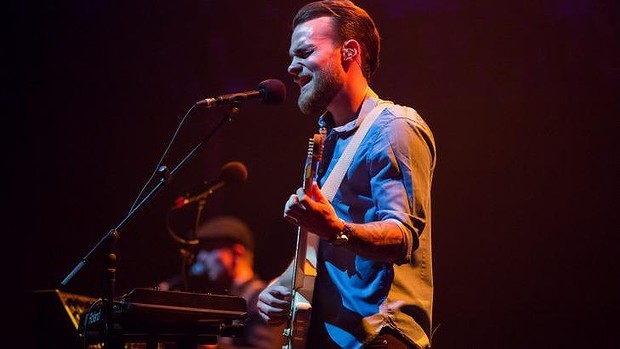 You are a beautiful man

However, his most standout performance of the night was yet to come. I literally sat gob smacked in amazement as Ásgeir launched into the most harmonically, pitch-perfect, transcendently beautiful rendition of Heart Shaped Box. Time and space disappeared as my tunnel vision zoomed in on just Ásgeir, lit up under a single, translucent beam of light. It’s moments like these that make you realise that raw talents like Ásgeir need live performances in order to demonstrate the true extent of their talent.

In between songs, Ásgeir took the time to thank to the audience for coming to see him in his adorably truncated English, gushing as best as one could in a second language about how honoured he was to be performing in such an iconic venue, before launching into Dreaming and Nu Hann Blaes.

Finishing on his most well known hit King and Cross, he and his band swiftly departed the stage, leaving the audience craving more as they stomped their feet in protest. But he wasn’t finished just yet, returning to the stage to perform On That Day with just his guitar to accompany him. This was perhaps the most poignant moment of the night. Ásgeir’s lone voice singing out to a captivated audience, concluding on a theme that had come to characterise the hour-long set : humble minimalism.