On a stifling Summer evening in Sydney, hundreds of punters packed themselves into the sweaty confines of Oxford Art Factory in anticipation of seeing one act: Odesza. With local Charles Murdoch opening up before the duo made their entrance, the difference between this performance and their last was palpable. Odesza’s last visit, at the Metro Theatre alongside Kele and Hayden James back in June, was a sparsely populated affair. Not as many people knew who the Seattle-based duo, which was lucky for those who did, and got to slip to the front of the mosh with relative ease and plenty of elbow room to dance.

But since then, Odesza, comprising of Harrison Mills and Clayton Knight, has taken off. Tonight was the first of two completely sold out shows, part of their mammoth international In Return World Tour.

Even Odesza themselves seemed to be in awe of their own success, shouting out at one point “Last time we were here no one knew who were were!” But now they had their own headline tour playing to a sold out crowd. The packed venue was heaving, with people even lining the entire ring of the upper level. Everyone was stoked to be there. Odesza was stoked to be there. You could tell from the very beginning, after exploding onto the stage with IPlayYouListen.

The crowd was momentarily taken off guard, before echoing Odesza’s gusto with ecstatic screams of excitement. The hypnotic power they opened up with carried through their entire performance, quickly whipping the crowd into a frenzy as they delivered an impossibly high energy set with tracks Koto and All We Need ft. Shy Girls, off their critically acclaimed 2014 album In Return (read our album review here.) The backdrop was a kaleidoscopic display of colours and images. The silhouettes of cacti were superimposed over a cityscape lit up at night, as bright lights pulsated in time to the beat.

One of the most entertaining things about Odesza is watching both Knight and Mills work in perfect harmony to deliver an incredible display of musical craftsmanship. In precise synchronicity, they turned the knobs and dials with the precision of a well-oiled machine, pumping out Sun Models and My Friends Never Die. Even when turned away from their decks and each other to play the drums, they were in time to each others’ rhythm. Their concentration was so complete that even a fan jumping up from the mosh, dancing between them gratuitously, couldn’t distract them from their performance. 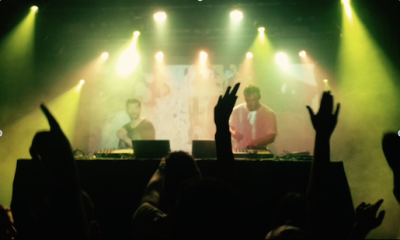 Put your hands up for Seattle, I love that city

As the night progressed, the air became clogged with humidity. By the time Odesza launched into Say My Name, everyone was doused in sweat. Another fan managed to get up on stage, this time a girl, but was promptly escorted off stage by a disgruntled looking stage manager. It was by this time that the concert started to wind down and Odesza finished off with I Want You, before departing the stage much to the disappointment of the crowd. However, they reappeared shortly, reassuring everyone, “Of course we have more for you guys, come on!” before launching into their remixes of Zhu’s Faded and Slow Magic’s Waited 4 U.

And thus concluded a night of electronic awesomeness. I think it really signified an epochal moment for Odesza, demonstrated by the enthusiasm of every single person there. In a relatively short amount of time, they’ve managed to accrue a phenomenal level of success and the kind of recognition that normally takes years to achieve. But that is simply a testament to a pair enormously talented artists capitalising on their ability to produce incredible music.

Odesza will be playing another show at OAF on Thurs Jan 22. It’s sold out, but you can still buy tickets to their NO.SLEEP afterparty at Goodgod, alongside Juan (RUFUS) and more. Click here for more info and here to buy a ticket.

In the meantime, have a listen to their amazing second album In Return below.