The first time that I stumbled across SBTRKT was in 2011, trawling BBC Radio One’s charts of the week. The track I was listening to, Pharaohs, was like watching someone sew multi-coloured fabrics of various musical genres to create a Technicolor Dreamcoat. It’s no surprise that 1,600 eager fans who held the same viewpoint packed in to the sold out Enmore Theatre for SBTRKT’s last show of his short stint down under.

Sydney trio Movement kicked off the music for the evening. Having caught the last couple tracks of their set at Falls Festival Byron Bay, I was eager to catch them again.  Proudly proclaiming how excited they were to be playing at one of the finest venues in their home town, they did not disappoint. Movement’s blend of deep, heavy beats, perfectly embellished by live distorted guitars hit all the right spots. The crowd lapped up each beat; I’m really excited to see what’s to come in Movement’s future.

Returning from Field Day, Falls, Southbound and the Forum in Melbourne, SBTRKT took the hallowed Enmore stage shortly after.The caped crusader behind SBTRKT is South-Londoner Aaron Jerome, not only known for his brilliant music, but the tribal masks which shroud him in anonymity, allowing the audience to focus on the music – not the man.

These days, I think it’s very important to tip your hat to electronic artists that can sweat out their songs using live equipment. It doesn’t require much skill to sit behind the decks and plat your own songs – even David Guetta can manage it. Jerome surrounds himself with three synths, a keyboard and a theremin. A percussionist aids him on his right, a keyboardist on his left (who,  also nailed an incredible bongo solo during the opening song,) and Sampha (Jerome’s prime collaborator) leads the front line.

You could feel chills down your spine as the familiar xylophone riff of Hold On wafted through the venue. Jerome then launched into tracks from his sophomore album, last October’s Wonder Where We Land. While the album wasn’t as explosively popular as his eponymous debut, there was something extraordinary about hearing it all live. All collaborators on the album (including A$AP Ferg, Denai Moore, Ezra Koenig and Raury) bring a different flavour to each track, adding a great deal of variety to the live set. There was a wild energy in the room, as tracks like Temporary View and Higher got the whole audience dancing until the last beat. Jerome and Sampha have amazing chemistry on stage, it’s almost telepathic, and so rewarding to watch.

Later on, we’re treated to a few earlier tracks. The stage is pitch black and silence descends as Yukimi Nagano’s first line in Wildfire rings out. All members stand straight starring into the crowd, waiting for a salute. The infamous siren sent the crowd into overdrive – it’s a song that’ll never, ever get old. As the encore begins, SBTRKT and co. return to the stage with Something Goes Right, Lantern, New Dorp, New York and a gorgeous remix of Radiohead’s Lotus Flower.

Throughout the performance was a stunning laser show and accompanying visuals, courtesy of Mexican artist pedro Linares. You’ve already seen his work on the cover of Wonder Where We Land (below.) Linares’ art was born when he dreamt about a lost city of dreamlike creatures, amazing structures and people alarming him to leave the city. SBTRKT explains that he’s using Linares’ art because he liked  the analogy, “the idea that something exists but there is nothing tangible about it.” It could be said that SBTRKT’s performance is a musical representation of the same idea. A real spectacle, SBTRKT’s flawless fusion of sound and style is only that much more special live. 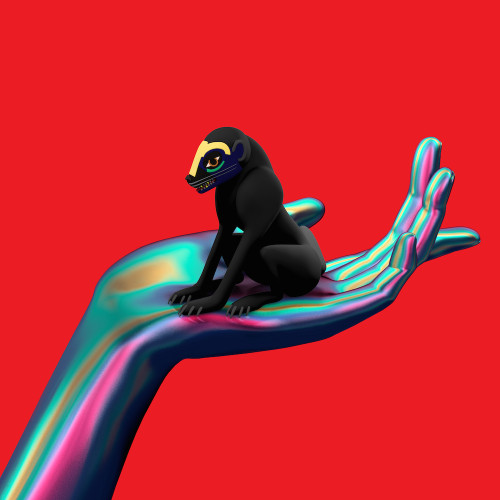