Don’t you just love that feeling you get when you stumble upon a new band?

Here’s one for you. They’ve been around for a while, but just in case they’ve slipped under the radar…

Welsh indie-rockers Catfish and the Bottlemen got together in 2008, and have since made three EPs and a full-length studio album. Their early sound has been influenced by artists like Oasis and Arctic Monkeys –.

In an interview with Triple J, the band’s frontman, Ryan Van McCann revealed his childhood connection to Australia and the reason for the band’s name.

“…my first memory of music is meeting this busker out on the harbour called Catfish the Bottleman and he used to play this thing with wine bottles hanging off of it like a drum kit.”

They released their debut album The Balcony in the UK in September 2014 and in the US earlier this month. From the tracks we’ve heard, it’s pretty awesome.

Check out their music video for Pacifier.

Like their sound? We have some good news for you! They are supporting The Kooks on their Australian Tour in January, starting this weekend in Perth.

If you want to see more of them, they also have their own headline shows in Sydney and Melbourne. 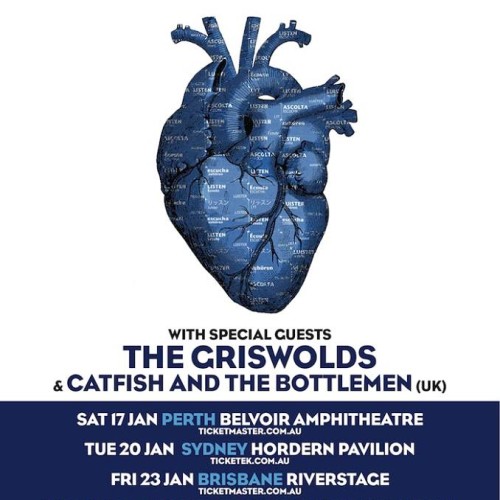