The usual suspects. A few wildcards, but nothing unexpected. The announcement was made on CBS This Morning early Friday by pop heavyweights Pharrell Williams and Ed Sheeran (a sign of things to come perhaps?), who revealed four major categories of nominations.

As usual, most of the nominees are artists who have dominated the charts over the past year. But could we expect to see some more surprise wins like Arcade Fire’s 2011 album The Suburbs? Wins are usually a mix of the critically acclaimed or the commercially successful, but sometimes even an unheard of underdog takes home the bacon. Below is a breakdown of some of the biggest categories of who could be winning big at next year’s 57th Grammys.

ALBUM OF THE YEAR

Look, let’s be honest. We all knew who the winner of this category would be the moment her album came out, and it goes without saying that Beyoncé will clean up big this year. No one else on this list even comes close in terms of musical prowess, star power and commercial success of her self-titled visual album. She didn’t even need to promote the album, she just dropped it on iTunes, lay back and watched the Internet go into overdrive. Such was the frenzied chaos of eager fans rushing to buy her album that they literally crashed iTunes.

What other artist can boast that, in an age where just actually buying an album is a feat in itself? Not only is it a financial success (it sold a total of 430 000 digital copies within 24 hours), but it debuted at number one on the Billboard 200 – Beyoncé’s fifth album to do so. It’s also the most critically acclaimed album on the list, with a Metacritic score of 85. The only other competitor that comes close would be Ed Sheeran’s X (pronounced ‘Multiply’) or Sam Smith’s In the Lonely Hour. They are both musical powerhouses in themselves, but it’s a pity that they go grouped together with Queen Bey.

This category is a little trickier because we have a few big contenders here all vying for the top prize. Personally, I think Iggy Azalea has the biggest chance at winning. She has dominated this year with her debut album The New Classic and the colossal success of Fancy, as well as making history by having two Top 100 songs at number one and two at the same time – the first person to do so since the Beatles in 1964. She’s collaborated with all the big names in the music biz, from JLo, Ariana Grande to Rita Ora. Although her album didn’t receive a standing ovation from the music community (especially the rap community), her star is certainly one that’s rising, and will continue to rise for the foreseeable future. However, I feel that this is a category in which actual newcomers might have a chance. For the past few years, unforeseen chart toppers like Macklemore & Ryan Lewis, Fun and Bon Iver have taken home the gold. Another interesting trend to note is that the most recent winners in this category are all Americans. There have been a few sporadic non-American wins such as Amy Winehouse and Adele in the past, so perhaps it’s the year of the Brit this time round? Maybe the so-called ‘male Adele’ Sam Smith or Bastille might secure another victory for the Motherland. Only time will tell.

RECORD OF THE YEAR
Fancy, Iggy Azalea ft. Charli XCX
Chandelier, Sia
Stay With Me (Darkchild Version), Sam Smith
Shake It Off, Taylor Swift
All about that Bass, Meghan Trainor

Again, this one is tricky. The real contenders here are Taylor Swift, Iggy Azalea and Sia. It would be hard not peg Azalea as this year’s winner considering the enormous success and seemingly unending reign of her hit single Fancy. The song was on the Billboard Hot 100 charts for seven weeks and catapulted the Aussie MC and Charli XCX to superstardom.

In saying that, she is going up against Billboard’s Woman of the Year, country crooner Taylor Swift. Such is the magnitude of Swift’s success that her album 1989 sold 1.287 million in its first week of release, a feat that hasn’t been equalled since 2002 by Eminem’s The Eminem Show, when people actually bought records. However, we could also see a surprise win from the publicity-shy Sia. Despite her reluctance to appear publicly for any of the accolades so generously bestown upon her, Sia’s Chandelier was everywhere as she continues to ride on a wave of successful hits, with little to no promotion.

It would be easy to say speculate that this year’s best rap album would go straight to Eminem. However, the usually untouchable star’s latest album has come under fire for featuring extremely offensive lyrics about both Lana Del Rey and Iggy Azalea. Eminem is no stranger to misogyny, but the reaction to these jibes were much louder this time than to his previous diatribes, and it could potentially cost him the accolade. Oxymoron by ScHoolboy Q and Nobody’s Smiling by Common are the most critically acclaimed on the list, both tying in with scores of 78 on Metacritic. But could it be Iggy Azalea’s The New Classic which takes home the top gong? If crowned the winner, Azalea would not only the first woman to win a grammy in this category, but the first Australian as well. The only other non-American to win Best Rap Album was Drake back in 2013. This could potentially stir up a great ol’ big shitstorm seeing as Azalea is constantly under fire for allegedly appropriating black culture. Personally, I’d want to see Childish Gambino win. His sophomore album Because the Internet brings way more to the table in terms of originality than anything else.

God forbid if Bangerz wins this one. I just don’t think the world can handle any more of Miley’s brainless trash pop excrement. Same goes for Prism. Katy, you and your barely disguised sexual euphemisms have had their time in the sun. Let’s be honest here: Ghost Stories isn’t going to win. It got absolutely trashed by the critics and Coldplay fans alike and scored a measly 61 on the Metacritic scale. You know you aren’t doing well when even your most loyal fans won’t flog your shit. I’d say this one is going to pop powerhouse Ariana Grande. No one can get enough of the baby prostitute Mariah 2.0 act. Hopefully Ariana won’t have to deal with deadly onslaught of tanned limbs and sharp wings like the last time she performed: 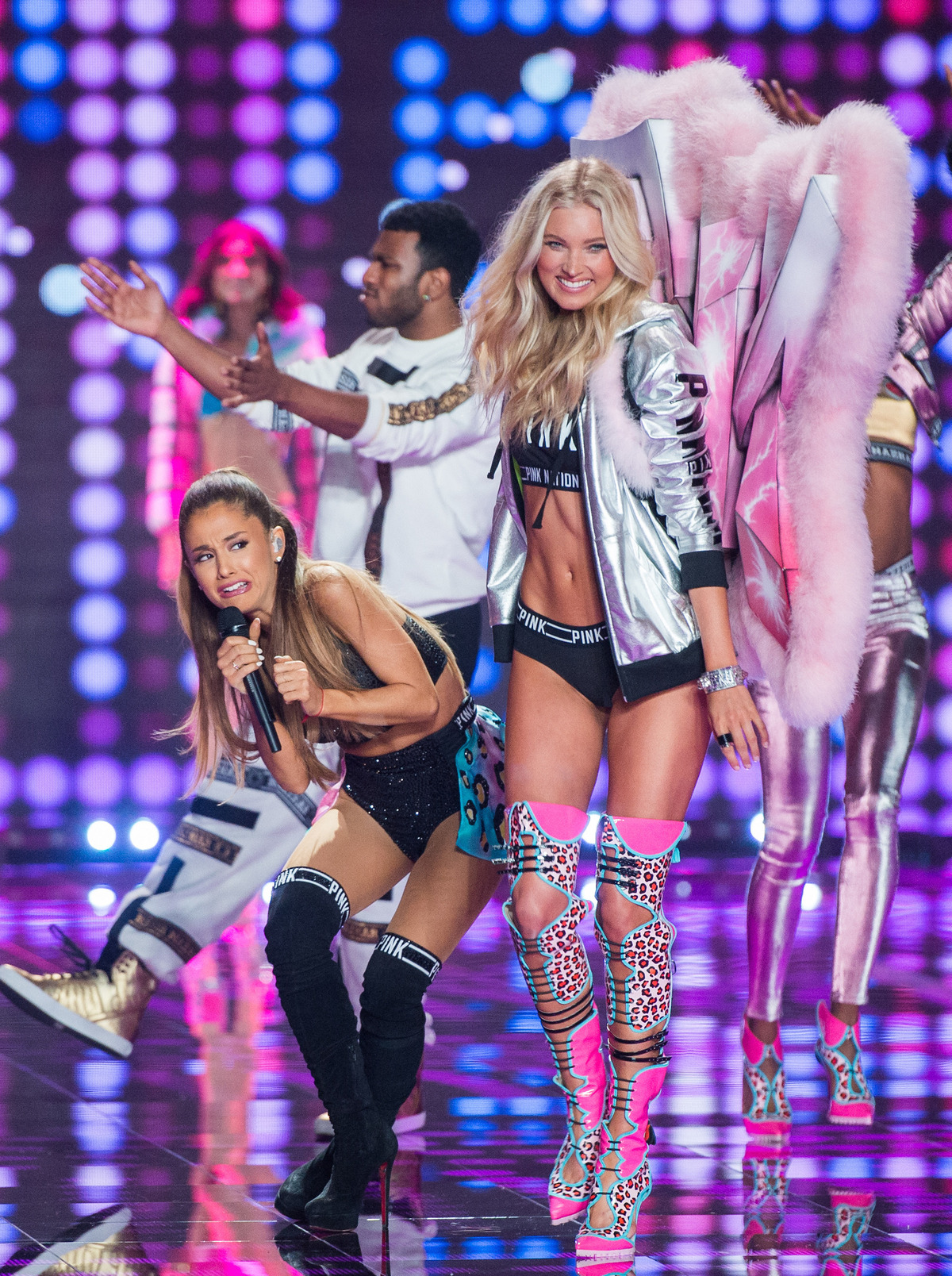 (NB: Lauren wrote this bit)
This was an unbelievably impressive year for dance music, and the nominations are a clear showing of that. Each of these albums not only showcase completely different styles of electronic music, but in their own right, each absolutely shines. Aphex Twin‘s nomination is interesting – the sheer amount of reverance that the dance music community overshadows the pure strangeness and utter obscurity of so much of his music. In a nutshell, it wouldn’t be easy for a newcomer to release an album like this, and receive the same praise. (Same would go for FlyLo.) Little Dragon’s album was a surprise nomination but absolutely deserving; it is truly special and I highly recommend a listen. While I don’t think he’ll actually win, though, my personal vote goes to Deadmau5. I fucking love this album, despite the two hour running time. I love the extended instrumentals, the musical breakdowns that have probably freaked the shit out of techno-heads and the fact that it’s essentially a Nine Inch Nails tribute album. (Some people wrote that as an insult. I see it as a compliment). As for who might actually win, it will probably go to Aphex Twin of Royksopp & Robyn, though I’m hoping for Mau5 or Little Dragon.