“This is the best festival in the world. There’s nothing else like it. Look at me, look at my face – trust me on this. It’s rock. It’s love. It’s people taking care of each other in a genuine and meaningful way. There isn’t nothing like this left in the world anymore.”

There is no festival in Australia that has the kind of rhetoric attached to it as the legendary Meredith Music Festival in Victoria. There are some key features that distinguish it from the music festival pack: it is non-commercial, it has the well-known No Dickheads policy, the ultimate nudie run that is the Meredith Gift, and it is BYO. But floating through the beautiful Supernatural Ampitheatre last weekend and talking to the crowd on my own I asked the same question of everyone: Why are you at Meredith? The answers revealed more than just a stellar line up and a chance to party out of the city.

“You don’t get treated like a child at Meredith. There’s no one standing over you telling you what you’re allowed to do and what you’re not, no one going through your bag or ripping your car apart. You take responsibility for yourself and they treat you with respect. I mean look, it’s BYO but do you see anyone spewing their guts up, do you see some arsehole off his tits about to kill himself climbing the stage or hanging off the trees? Yeah, it’s a respect thing, they respect you so you respect them.” 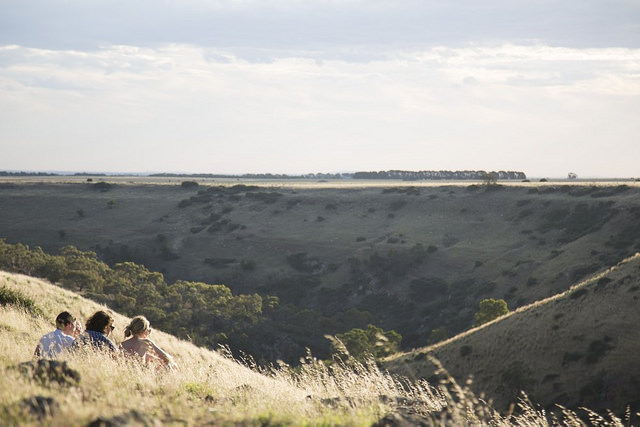 A few hours out of Melbourne lies the Supernatural Amphitheater or “The Sup”, the hallowed ground of Meredith Music Festival, now in its twenty fourth year. This beautiful property is perched on a ridge looking out over the Victorian countryside and wind farms, a serene idyll where light falls in a golden rain and lends an unreal glow to the paddocks surrounding us. The festival organizers, the Nolan family, have built permanent infrastructure including composting toilets, showers and water recycling facilities on their farmland for its use as a festival site not only for the 17 000-strong sellout crowd at Meredith but also for Golden Plains Festival in March. Settling in on Friday afternoon, I stretched out in the Sup and took in the stands of fortuitous trees dotted right where you need them, the couch city that changes the whole feel of the festival from a large scale event to the best backyard house party you’ve ever been to, and the many beautiful kitted out and happy people finding their place in the crowd.

“The entire atmosphere is about community. Everyone is friendly, everyone is helpful, there are so many volunteers and people who will help you. You know the money isn’t going into some company that doesn’t need it. You see just as many locals as Melbourne hipsters. I used to get dressed up, get into the scene of it, but now I just don’t need to. It’s whatever you want it to be.”

Early in the evening the clean up song is chosen by the crowd – “Welcome to the Jungle”, the anthem that when played means the whole crowd gets to cleaning the areas around them. Giving the crowd this sense of ownership, not only of the festival but of their behavior, has a transformative effect on the atmosphere. There is no us-versus-them, everyone has the responsibility to be an adult, take care of this place and take care of each other. As the incredible Jagwar Ma send the crowd into a psych rock frenzy after midnight, a lone soul is crashing around the crowd, unable to dance and remain steady on his feet at the same time. I am getting annoyed as he smacks into me repeatedly and am tempted to tell him to move out of the crowd. Instead when he once again charges into a bunch of girls standing nearby, one of them puts her arm around his shoulders, holding him upright and rubbing his back while her friend gets him some water, dancing and smiling all the while. He showers them in beatitudes while the crowd swallows them up, the good times continuing with this madcap reveler barely a blip on anyone’s radar. Clearly, I am still learning the Meredith way. 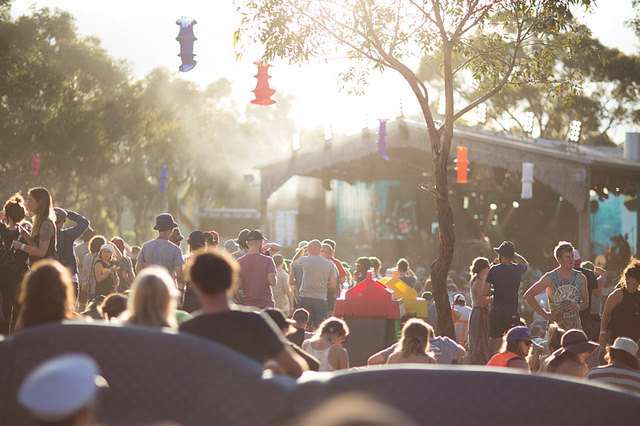 “Did you see War on Drugs? To be honest I don’t even look at the line up. I know I’m always going to come to Meredith. We met here two years ago, and now we live together. He’s been coming twelve years, her parents still come. People assume you’re off to Meredith to roll around in the mud all weekend, and it can be that if you want. But I come for the old guys in their bikie shirts, the families running around, the vibe of it. There’s a Viking around here, have you seen him yet?”

The acts are always carefully curated, though many people I spoke to said the line up doesn’t matter. There are too many magic moments to go through, starting with the beautiful Mark Lanegan almost making me have an accident as I just had to wait for his set to finish before I could tear myself away to the bathrooms and War on Drugs sending the crowd into a dream state as twilight fell and the Sup lit up like a carnival. Adam Granduciel is a tonic, and their set sounded like waking up with stirring riffs and a gentle touch just when you need it. Jagwar Ma kicked the crowd into overdrive, and stone cold sober it was almost too much to take. The feelings stirred up in the Sup are what I imagine people experience at evangelical revival churches, the kind of cultish hysteria that raises the near-dead and has wild men speaking in tongues. Certainly by the time I went to bed I had seen a lot of both. 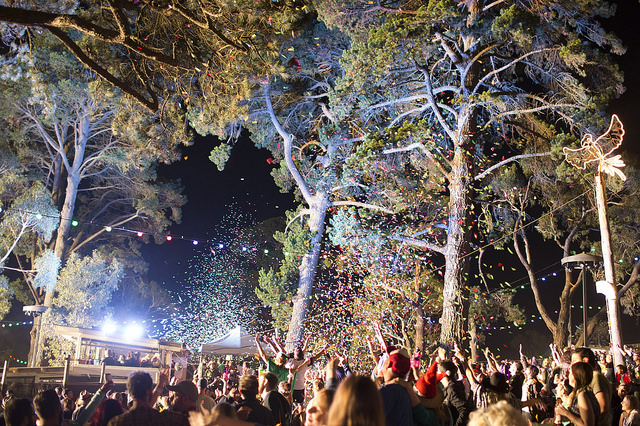 On Saturday the stories of all that Meredith can be come true, with one thing leading to another in the best possible way. A glistening, perfect morning in the Sup with a book and Tiny Ruins became an afternoon at new friends’ campsite. After a rabid bullant bite, a walk to get Stingose turned into joint mission with two Melbourne legends to return a missing camera to its rightful owner. That mission became the four of us lying squished on the floor of a plumbers van laughing at Star Wars references and mega pickles. Ghostface Killah was a crowd-mongering powerhouse, keeping it short and snappy and the highpoint coming when a paralympian crowdsurfed his way to the front in a wheelchair and proceeded to absolutely slay on stage. From there I found myself at a tropical fruit themed campsite with coconuts with emojis for faces, interchangeable and reflective of the mood of the group. In dappled sun with a cooling breeze the now dozen people smashed into a piñata and took off for the sunset strip. 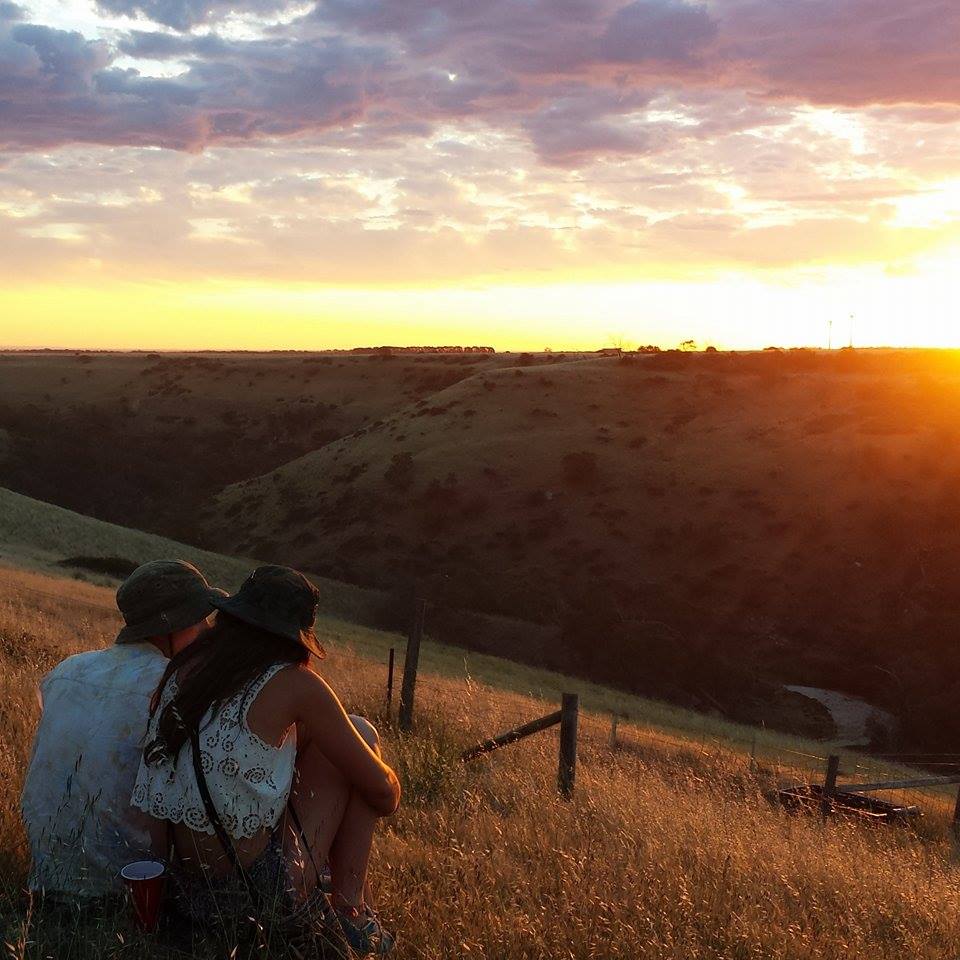 Sunset is a special time at Meredith, with hundreds of people perched in golden light on the precipice of the valley watching the ringed clouds morph and glow as the sun drifted to the horizon. Waves of applause, group hugs and spontaneous singing broke out as Saturday afternoon finally ended and Saturday night began. De La Soul once again showed that hip hop acts know how to work a crowd, taking over the Sup with three guys and twenty five years experience on stage. The crowd became a spectacular part of the act, described by Kelvin Mercer on stage as “a dancing alien light force”. An eight year old got pulled on stage, the crowd screamed and rapped along and it wasn’t until seven AM that the merciful Silence Wedge cleared the air.

It’s a rare case that the rhetoric can live up to the real thing, but this is the case with Aunty Meredith. On Friday there was a wedding on the hill, and on Sunday the crowd gathered for The Gift and watched a runner propose to his girlfriend, who have been running the Gift together since they met. Anything is possible at Meredith. Yes you’ll be seeing me next year, and no it won’t matter who is on the line up. After asking thirty four people the same question, I know now that’s not why you go. 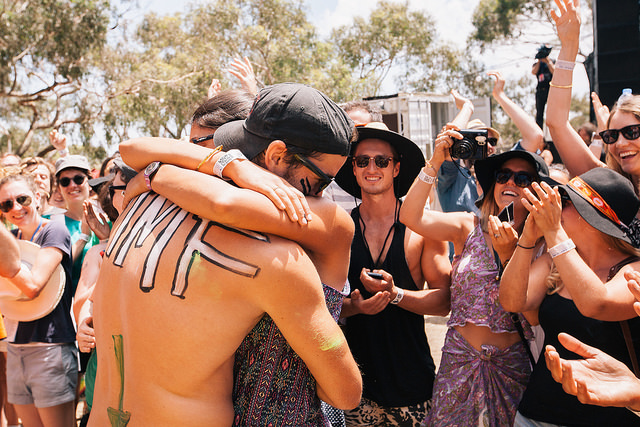 The proposal (his mum made him promise he’d put his pants on to pop the question.)

Big thanks to Brett, GP, Cameron, Fabian, Benji, Dale, Jess, Sarah, Jackie and the End of the Road campsite for making my solo weekend so special!