Today marks 25 rollercoaster years of everybody’s favourite yellow nuclear family, The Simpsons. We’ve had the terrifying lows of the present day, the dizzying highs of the 90s, the creamy middles of the early 00s but since first gracing the televisions of the world in 1990, the year of my birth, The Simpsons have been perhaps the one pop cultural constant throughout my entire life. Along the way they’ve had a litany of musical cameos, and to celebrate 25 years, we’re taking a look at the best of them. The one rule: The cameo must be the artist or band performing as themselves, so apologies to Space Coyote (Johnny Cash) and Leon Kompowsky (Michael Jackson). Here we go: 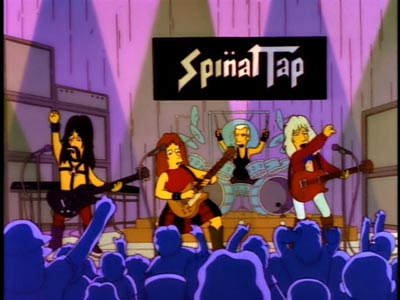 The blending of the best parody band of all time along with the most gleefully cutting satire of the 90s was an explosion of hilarity and put me in hysterics. I still quote this shit today: The band wondering who had benefitted more from the fall of Communism than themselves. The lighting crew missing the cue to turn up the house lights so they could let the audience know they’re the sixth member of the freaking group. “My vision!”. Their tour bus crashing in a ball of flames after a lengthy discussion on the quality of last night’s show (‘Yes, quite good’). And of course, one of my favourite lines of all time: 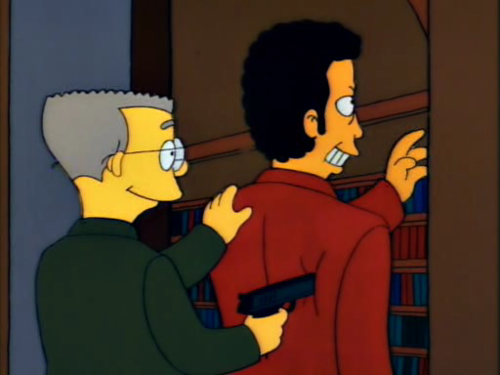 Usually I’d wrinkle my nose up at anything involving Tom Jones, that ancient crooner all the septuagenarians lose their underpants over; however, his cameo on The Simpsons as one of Mr. Burns’ lavish attempts at seducing Marge was simply amazing. From Smithers showing him what’s inside this briefcase 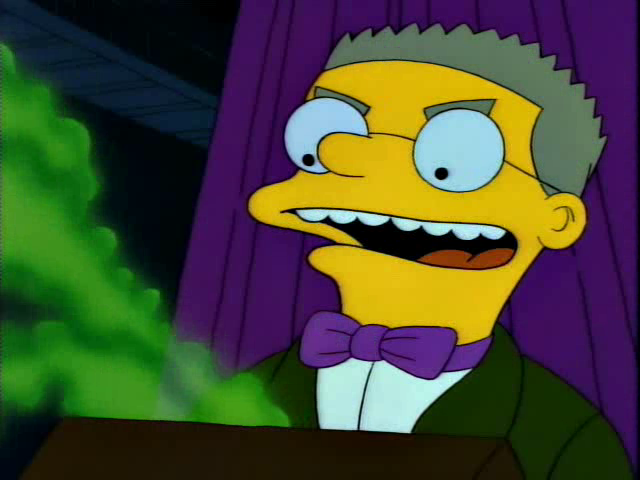 To being held at gunpoint (and knocked out cold by a secret door) and forced to smile (“everybody’s happy…”) to his show-closing performance of It’s Not Unusual chained to the stage, Tom damn near stole the show here. 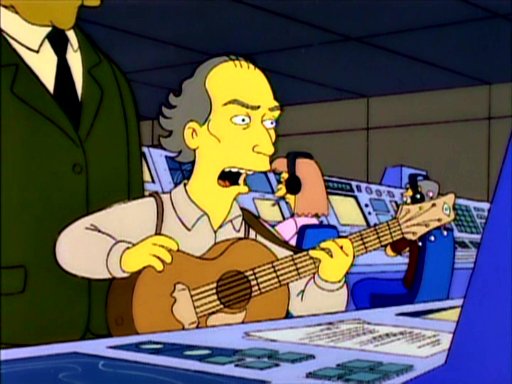 This one is so underrated. ‘Unkempt youngster’ James Taylor (wow, former president, James Taylor) and his ‘unique brand of bittersweet folk rock’ provided the perfect soundtrack to Homer’s ill-fated voyage into outer space. He ran through You Got A Friend, telling Buzz Aldrin to ‘float there and like it’ and then Fire And Rain, changing ‘sweet dreams and flying machines in pieces on the ground’ to ‘flying safely through the air. Beautiful. Watch it here. 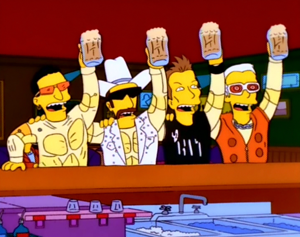 I’ve made no secret of my sheer hatred for Bono and U2 but their cameo was actually hilarious, if only because of the adjuvant antics of Homer, who manages to sneak backstage to their show under the guise of the ‘potato man’ (‘Where the bloody hell have you been?’). Bono assuring the crowd that the stage-crashing Homer will ‘get the help he needs’ (while his security team beats him up on the JumboTron) was side-splitting. Even their brief appearance in Homer’s Candy Man-inspired rendition of The Garbage Man wasn’t awful. Well played, Bono. 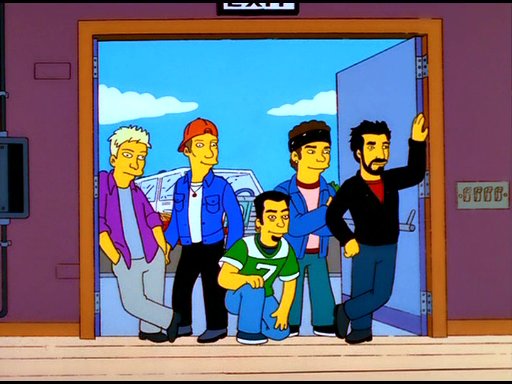 One from a later Simpsons episode, the majority of which I am not fond of, New Kids On The Blecch was surprisingly outstanding. A brilliant send-up of the boy band craze that was sweeping the early 21st century, N’Sync were great sports in poking fun at themselves and their discourse. Joey’s insistence on ending sentences with ‘old school’ and JC being dragged off to the Navy at the behest of Lance Bass were the highlights.

5: The White Stripes – Jazzy And The Pussycats 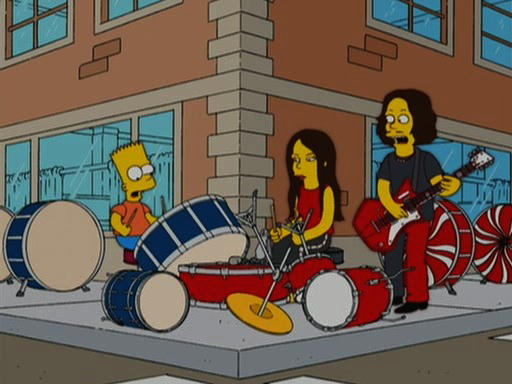 Another 21st century Simpsons moment that didn’t suck, Jack and Meg come face to face with Bart in a Simpsonified version of the music video for The Hardest Button To Button that is nothing short of wonderful. So is Meg and Jack trying to kick Bart’s ass following him crashing into them. 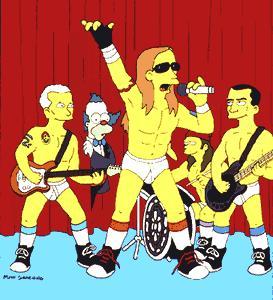 Krusty Gets Kancelled was littered with guest stars like Bette Midler, Elizabeth Taylor and Hugh Hefner, but the Chilis were the highlight. Their best moment?

Changing Give It Away from ‘what I got you gotta get and put it in you’ to ‘what I’d like is I’d like to hug and kiss you’ seconds after declaring their lyrics ‘like our children, man’,

“Dancing in their underwear… how degrading”

Then turning up at Moe’s still in their underwear for the after party. 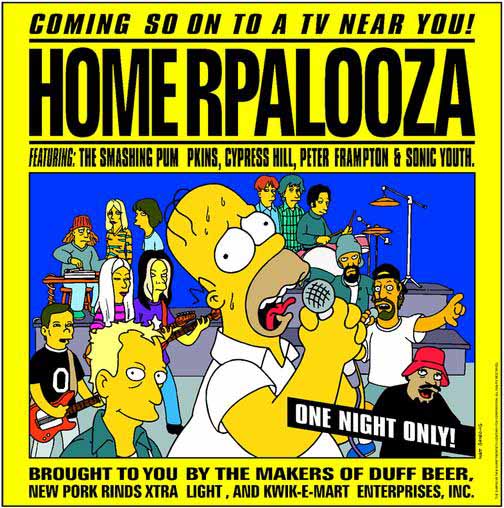 No episode captured the 90s slacker cultural landscape that The Simpsons was built upon quite like Homerpalooza. Iconic moments everywhere. From long-suffering oldie Peter Frampton and his talking guitar (and Otto’s talking shoes), Sonic Youth stealing from his cooler, Cypress Hill stealing his London Symphony Orchestra (‘yo did we order an orchestra?’) for an extra classy version of Insane In The Brain

and appreciation of the Smashing Pumpkins and their ‘gloomy music’ stopping his children from ‘dreaming of a future I can’t possibly provide’. The whole thing was perfect satire of alternative music culture and Lollapalooza, all delivered with that impeccable timing that made The Simpsons in the 90s such a force.

Remember, ‘if it’s brown, drink it down. If it’s black, send it back’.

We had Ringo Starr as Marge’s teenage crush finally responding to her fan mail/art after 20 years:

We had the late George, positively chuffed to meet ‘nice fellow’ Homer at the Grammy’s after party:

And we had Linda and Paul McCartney, giving Lisa advice on being a vegetarian. Complete with Apu’s outrageous bongo cover of Sgt. Pepper’s Lonely Hearts Club Band. 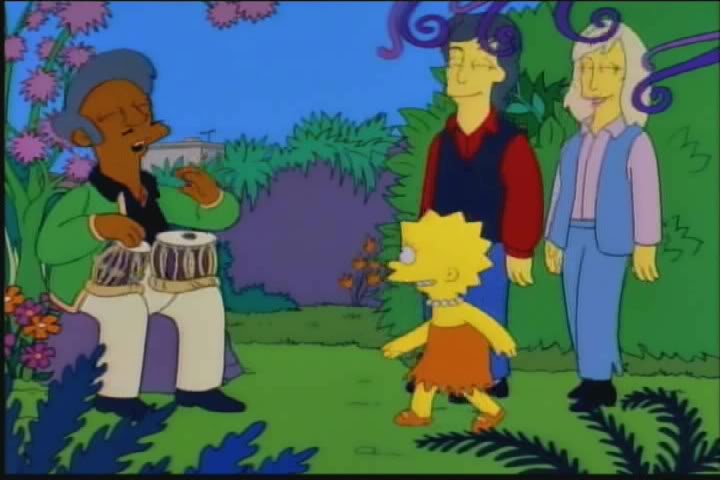 We were tragically a John Lennon away from the entire band in their yellow form, but these were perhaps the three biggest musical cameos The Simpsons ever had in terms of importance and sheer fame, that they were all an absolute stitch was even better. 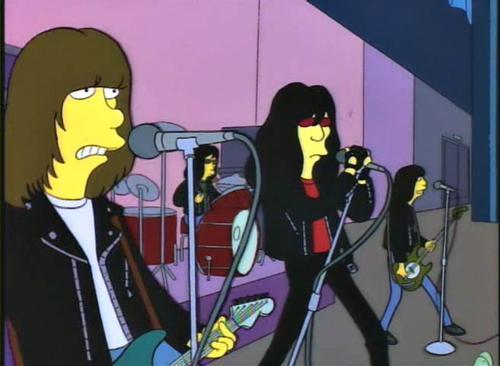 Oh man. Ohhhh man. This is the undisputed heavyweight champion of them all though. Fitting that the greatest musical cameo in Simpsons history came in an episode frequently regarded as one of the best. Everything about this was hysterically superb:

Johnny taking the time to tell the audience his feelings on this gig (it sucks), Joey’s unmistakeable snarling vocals over a gutter punk version of Happy Birthday (to ‘Burnsy’) and C.J. (I’d have preferred Dee Dee but it’s still amazing) saluting Mr. Burns in the most punk way imaginable (‘Go to hell you old bastard’) before the curtain is drawn and they noticeably mellow out of their onstage personas. The whole thing is utterly perfect. It captures everything that the Ramones were in under 30 seconds and does not EVER stop being funny.

And crotchety old Mr. Burns insisting that Smithers ‘have the Rolling Stones killed’ is the howl-inducing cherry on top of possibly one of the single greatest gags in the 25 year history of The Simpsons.

They just don’t make ’em like they used to.