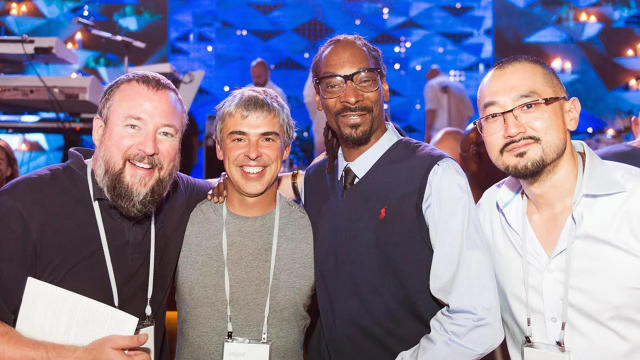 I’ve dealt with almost all of the ridiculous antics and unmitigated asshattery Snoop Dogg has forced upon us in recent years, but the above photo from just a few days ago might be the one that actually broke me. When I first began to realise that Snoop Dogg as we know him is long, long gone.

Look at it. Look at Investor Snoop, standing next to the co-founder of Google looking like Carlton after a rough stint inside, or a run-in with a bee hive. What happened?

Look at those glasses, the sleeveless Polo sweater vest, that smug grin. He looks like a guy who builds train sets and collects stamps.

There’s nothing wrong with that, but this is SNOOP we’re talking about.

There’s no point really asking that. Only he knows, and he hasn’t responded to any of my questions on Instagram. It’s more a question of when. Snoop Dogg used to be a pillar of the rap game and then everything just went to hell. And it saddens me.

I’m just trying to pinpoint the exact spot in Snoop Dogg’s career where he reached into his big, blue, diamond-encrusted sack of fucks to give and came up empty.

This is the man who stepped up and didn’t just steal the show from Dr. Dre on The Chronic, he robbed him blind. The man who pioneered the G-funk style of rap and gave us Rhythm And Gangsta, The Doggfather and motherfucking Doggystyle (if you haven’t driven through town blasting G’z And Hustlaz out of rolled-down windows, you’ve scarcely lived). In an era where rap was proliferated with ‘studio gangstas’, this was the man who was once a blue-bleeding member of the Rollin’ 20 Crips. We’re talking about the man who once rapped, ‘Roll up the dank and pour the drank, and watch yo’ step, ’cause Doggy’s on the gank’.

and many other lyrical wonders

The man who gave us the most realistic performance of a wheelchair-bound crack dealer in cinematic history. The man who all but patented C-walking as a means of transportation. Possibly the only living person to ever have OD’d on weed, he’s been arrested for possession of marijuana more times than I’ve had hot dinners. This man.

It wasn’t the dawn of the 21st century, when he kind of toned down the whole gangsta image and started dressing, rapping and speaking like a pimp (Can You Control Yo’ Hoe perhaps the zenith). Gangsta to pimp is a pretty seamless transition and probably a necessary one given that Snoop was heading into his thirties and probably hadn’t walked a block on Long Beach for a good number of years. Plus, that era gave us Paid Tha Cost To Be Tha Boss and Rhythm And Gangsta, and I love the holy hell out of those albums.

Personally, I’m tracing it back to his dive bomb into the waters of reality TV around 2007 with Snoop Dogg’s Father Hood. Centred around the zany antics of his family, the episode summaries were along the lines of: ‘Snoop tries to introduce soccer to the kids. Meanwhile, Shante tries to deal with Snoop’s diet’. Yep. This is where Snoop went downhill. Before that, his career had flourished, both critically and commercially, on the foundation that he was some kind of mythical gangsta-pimp-wizard. Father Hood showed the world that Snoop Dogg was really just a swiftly-aging dad and a husband (whose wife just can’t even with his diet). And it unravelled from there.

He started collaborating with people like Soulja Boy Tell ‘Em, Too $hort and that sea urchin, Lil Jon. He rapped in a Bollywood film. He was directing his own pornography. He began using AutoTune. He released the concept album Mac And Devin Go To High School (how ‘Snoop Dogg is a high school student’ can be considered a concept and not a nightmare is beyond me) with Wiz Kalifa as well as a pants-shittingly awful accompanying movie.

But it all paled  in comparison though to the sheer lunacy that was his Snoop Lion phase. 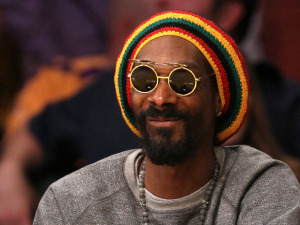 Oh boy. Ohhhhh boy. I can’t tell you how much I both enjoyed and recoiled with horror as this story unfolded. Snoop claimed he had been ‘reincarnated’ by a Rastafarian priest while visiting Jamaica, which was code for ‘I have no ideas left for my next album. Literally none. What’s the most ridiculous thing I can do to get people talking about my music again?’. Of course, Snoop answered that question by changing his stage name to Snoop Lion and releasing Reincarnated, an album constructed entirely of cultural appropriation and the tears of small children. Featuring such gems as La La La, Smoke The Weed and Ashtrays And Heartbreaks (which sounds like the title of a really shitty metalcore song) with Miley Cyrus. Enough fucking said.

Mercifully, his last run of Australian shows as part of the Big Day Out tour featured minimal reggae rap batshittery, but the wounds were deep. We knew Snoop was a pretty money-conscious individual (as anyone who knows the lyrics to Gin And Juice understands), but he’d gone so much further than exploiting his gangsta image to make a buck and instead kind of blatantly exploited the whole Rastafarian movement, Bunny Wailer (of Bob Marley and the Wailers fame, which I don’t even know if there’s a higher level of Rastafarian to be) even called him out on it. The whole thing was a giant farce and Snoop seems to have left the Lion moniker alone. For now.