Wu-Tang Clan, Ruckus in B Minor

Yep, I’ve got a new Wu-Tang song for ya – and what a stunner it is. Produced by the musical Gandalf that is Rick Rubin, it features on their highly anticipated 20th anniversary album A Better Tomorrow, due out December 2. This is one hell of a classic Wu track where each member has a verse – and they’re slick as fuck. Not even going to spend more time describing it, just listen here.

This stream might take a few minutes to load, I couldn’t find it on Soundcloud. In the meantime, listen to the two tracks below!

Earl Sweatshirt, 45
At just over a minute long, I’m guessing that this is only the first part of a longer track, but it’s sick nonetheless. Raw and minimal, Sweatshirt’s signature voice over a basic beat and deep horns. Really digging this, and hopefully it means that we’ll soon be hearing more from Sweatshirt – possibly a follow-up to last year’s brilliant album Doris, eh??

Phantogram hooked up with Brazil’s Leo Justi to remix their latest track Black Out Days, with an extra special MINUTE LONG verse from Danny Brown. Brown’s been collaborating with an unusually diverse group of artists lately, from Purity Ring and Vampire Weekend to Charli XCX. A manic remix that’s equally cool and club-ready, Brown’s unique lilt adds so much to this awesome tune.

As an added bonus, here is a Wu-Tang Flan. 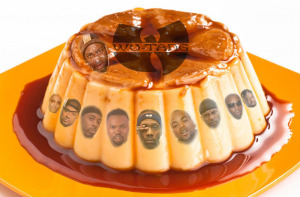