Ever since one disgruntled fan shouted ‘Judas!’ at Bob Dylan for the folk singer having the gall to incorporate electric guitars into his music, the phrase ‘selling out’ has entered our day-to-day lexicon. Sometimes the gripe is legitimate, the change in sound or image of our beloved musicians so blatantly, cash-grabbingly obvious. Other times it’s less ‘selling out’ and simply a creative decision to head into a direction largely unfamiliar and rankling to their swathe of fans.

And sometimes, musicians simply say ‘fuck that’ and keep on keeping on, refusing to bend to the allure of gargantuan money or explosive fame. These are some of them: 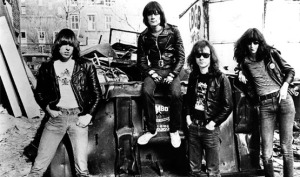 God rest the Ramones. One of the most important and seminal bands of the last 60 years, they distilled music down to its rawest elements and created a sound equivalent to sheer power. Despite their militaristic pledge to make every song of theirs three minutes of three simple chords and shouted vocals, they never felt boring. Not for me anyway.

And they’re on this list because they never changed their sound to fit the scene or make a shit-ton of money. They made it through the 70s, 80s and early 90s riding those three chords all the way. They just kept playing on like a long-haired, leather jacketed version of the Titanic band, through disco, new wave, the MTV wave of pop, hair metal and grunge, with other artists changing sounds as often as underwear.

Doing the same thing over and over again is often called insanity, the Ramones called it punk. 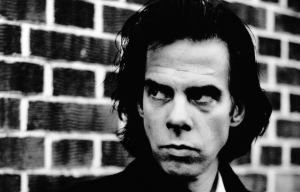 Few have shunned the bright lights and big stage the way Nick Cave so consistently has. And forget Sia and her ARIAs giveaway, Nick Cave recoils with horror from the mere idea of awards as though they’re made of cyanide or Creed albums.

Having received a nomination for Best Male Artist at the 1996 MTV EMAs following chart-rocketing duets with Kylie Minogue and PJ Harvey, this could have been the catalyst that sparked a lengthy and insanely profitable mainstream career for the Aussie crooner. His response to such a prestigious nomination may have been the politest form of insanity I’ve ever seen: 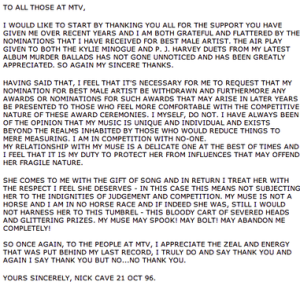 Dear MTV, up yours. Nick.

He cites appeasement of his muse as the reason, but I like to think it’s just because he had approximately zero time for the sickening pomp and bullshit of MTV, even as far back as 1996. Good on you, Nicko. 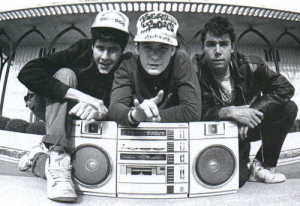 For a Caucasian rap group who bordered on comedic act in the late 80s (before absolutely CRUSHING it in the 90s mind you), the Beastie Boys have surprisingly looked upon the act of selling out with nothing but disdain. Hell, Flavor Flav was in Public Enemy, one of the most ornery, politically-charged rap groups of all time, and even he thought that ‘Flavor Of Love’ money was too good to pass up.

Not the Beasties though, who have staunchly refused to allow any of their songs to be used in advertising, ever. They took on Monster Energy and even a company trying to push the concept of Lego blocks for girls for misappropriating their music. They also pissed off a great deal of their fans over the years by famously refusing to play their biggest hit, (You Gotta) Fight For Your Right (To Party!), live, simply because they loathed how people had misinterpreted it as anything more than satire.

How much do they hate the idea of selling out? From beyond the grave, that’s how much. When MCA tragically passed away in 2012, he went as far as to include a ‘No Sell Out’ clause in his will. 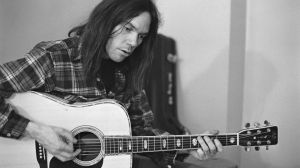 The amount of shits Neil Young gives about anything ranges between ‘minimal’ and ‘none, absolutely none’. He once walked out on Stephen Stills mid-tour and only left a telegram telling him to eat a peach, to give you some idea of his level of shit-giving.

He’s made an entire career out of just doing what he wants, regardless of how it will affect album sales or his public reputation. And when he’s responsible for classic albums like Harvest, Zuma and After The Gold Rush, you can’t fault him for that. Flea of the Red Hot Chili Peppers put it remarkably:

“He’s made whole albums that aren’t great, and instead of going back to a formula that he knows works, he would rather represent where he is at the time. That’s what’s so awesome: watching his career wax and wane according to the truth of his character at the moment”.

He also isn’t one for the Almighty Dollar of big business either. He donates proceeds from his concerts to go to environmental causes all the time and drives a Lincoln that runs on corn-based fuel. He’s the man.

“Maybe we could whore ourselves out for the right price someday. But I always think, “Would Neil Young do this?” And the answer is no. Neil Young wouldn’t fuckin’ do it”. 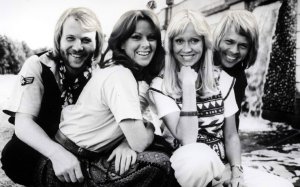 Hear me the fuck out on this one, alright? Despite the inherent coolness of everyone else on this list, despite ABBA being a crock of unequivocal cat shit and the undisputed soundtrack to everybody’s mother drunkenly swaying and trilling out of tune to at family gatherings, they are the Beatles of not selling out.

They turned down one billion dollars for a reunion tour.

Dr. Dre had to come up with a new line of luxury headphones, overprice the unholy dick out of them and make them successful enough to sell to Apple to earn within the same realm of money as some raving lunatic was willing to pay fucking ABBA just to put on their ridiculous costumes and warble their way through their litany of musical excretions onstage one last time. And they looked that person dead in the eye (or from any of the strange angles they employed in their music videos) and said ‘nah’ in a Swedish accent.

Unheard of. Unfathomable.  It would be one thing were they a respected, beloved band like Zeppelin or somebody who didn’t want to ruin a lasting legacy,  better bands have reunited for much, much less, but this is ABBA we’re talking about. They’re the butt of so many jokes, and they somehow still had too much pride to take that veritable Mount Everest of scrilla and run.

Well, say what you will about ABBA. They’re either shitrat insane or, behind the feathery hair and unsettling weirdness, are some of the biggest stones in music history.  Turning that offer down makes them the heavyweight champions of this list, an incredibly sobering idea.